Note to PCs: you can't buy guns here because that's just silly. Pay a fixer or go to The Hoop for that. I hear Militech and Arasaka's RRPs are pretty good too. 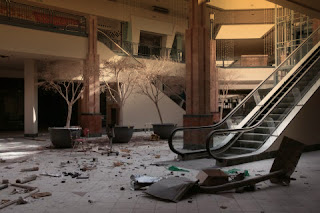 The Hoop was the ultramodern shopping experience in 2013, but is now a chaotic, donut-shaped shanty-market amongst the shells of old GAP stores and DELL franchises. It was abandoned due to the rise of gangs in the area and the construction of the superior Thirty Mile Mall.

They actually keep livestock in here.

The Hoop is also home to recent start-up, Interzone Private Investigations*. Ex-Infocomp employee, Hendrik Van Zyl, chose The Hoop as it was the only space he could get after Infocomp had shut down all his other avenues. His Infocomp contract terminated and with very little money, he decided to offer what he knew to paying customers. IPI's office is located on the second floor, in a cramped, dilapidated Tie Rack.

The Hoop's abandoned parking lot is the place to find Honest Andris' Motorama* - finest vehicle from Eastern Europe! Andris Ozols was an entrepenuer in Latvia until that nation was torn apart during a religious war a few years ago. He emigrated to the SACR, and is now dealing in inexpensive used cars from Eastern Europe. Deregulated environmental protection laws and vehicle safety codes make it easy to scrape them up to emissions and safety standard levels. Andris buys older ones for next to nothing, has relatives assemble working examples from the best parts, and has them shipped here to sell for a profit.

Andris himself is a cheerful, friendly man, but is a schemer. He has so far sold every vehicle he brings in, and his repair shop for these vehicles does pretty well too. In other words, he doesn't haggle over the price of his vehicles. He might take a trade, but only if he is certain he can sell the trade item for at least the price he would normally get on a car.

Honest Andris' is a place for low-level PCs and NPCs to get some cheap wheels that won't leave them heartbroken when they get destroyed. He may also have tentacles in other businesses, like smuggling immigrants, drugs, or guns from Latvia. He may have contacts within the Kombinat too. These activities may make him somehow more useful to the characters than just as a used car dealer. 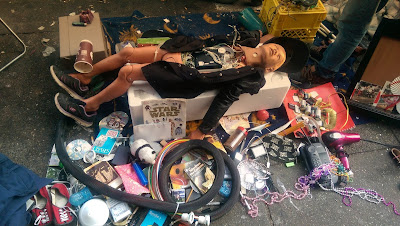 A bustling semi-permanent, shambolic street market with all
the very latest counterfeit big-brand electronics from around the globe. Also a good place to find illegal software and discounted ICE beneath the the colourful plastic sheeting. Repairs, fixes and repurposing services are all available here for a fee, as are CAD-lathe manufactured smart-guns and jury rigged UAVs. Numerous Chinese, Malay and Vietnamese chipstores. Prone to PSA raids. Also home to Bad Sector, a computer shop selling reconditioned hardware at knocked down prices.

The six suites are large and spread throughout the building, over the first three floors. A small, discrete reception desk is set in a small lobby with no windows, and all visitors must be buzzed in by the receptionist who monitors the exterior with cameras housed in the building’s cladding. Access to the sim-stim pods requires 100eb per hourly session or 1000eb for a monthly subscription. Members can enjoy clean facilities, soft to very hardcore programmable fantasies, the post-’stim bar area (Afterglow) on the upper floor and a Hyperlife™ across the street. Long term members tend to be conservative-looking, corporate couples looking to spice things up in safety, or hygiene obsessives with a fear of human contact.

The front of the shop is a small open court with tiled floor and a few tables and loungers on which to chill out on while a game is in progress, or watch the tournaments on big hanging screens with a Coke and a hotdog; this part has the best lighting so you don't spill your sauce.

Past the food court's low railing is the darker games section - black and blue ceilings and carpets, lit aqua from all the screens, air full of the constant thunder of engines, gunfire and spell effects. 'Partial enclosure' type machines are laid out in rows, using polymer flatscreens that get the player into the action of the simpler, cheaper games to the front, followed by a central pillar about which are a series of 'dentists chairs.' Players with I/F ports or 'trodes can jack in here to join in worldwide VR-X game tournaments - the chairs are upright until game start, then straighten, feet towards the pillar.
There are some extra loungers around this section for observers - dedicated game screens for the current action are mounted on the pillar, skipping from view to view and scoreboards. Some of the 'larger' worldwide games even support commentator hook-up, with instant replays and media controlled camera views to get the most dramatic shots of the action for the viewers.

Past this section, in a quieter thinly screened off room is the netcafé aspect of VR-X. Dataterm like PC's with cheap connection rates for VR-X clients are available for those who want to jack their personal deck in and be guaranteed a good linespeed for the night- or just a safe place to get local information.

VR-X arcades are always under constant video surveillance, and offer free net views of the shop - ostensibly so worried parents can see what their children are up to. This surveillance heavy aspect to the place avoids a lot of trouble - anyone with a 'past' who doesn't want to be on camera goes nowhere near the place… unless they know the guy at the kiosk. If your face is no liability, the noise and complete focus on screens will keep anyone from noticing you're muttering darkly through your hotdog wrapper. They still have trouble with bullying issues and the odd desperate 'dorpher wanting to roll kids for their pocket money, which is generally handled by a security guard or two from whatever company is available locally.

Their most major problems are with net security - the constant effort put into maintaining line speed and the VPN lines to other continents make them an excellent conduit for fast, long range hacking. (There are the conspiracy theorists who think this is the whole point of the place, but as a franchise it's viable on its own, without criminal activity.)

*with apologies to VftE members for bastardising their ideas. :)
Posted by Geist at 17:30