After I posted a couple of maps on the blog yesterday, Mateusz Wisniewski asked some very pertinent questions:

"Actually, I have an idea for you: describe each city/map. A brief one will do. Several facts are less than obvious to me, especially in case of the Cape Town:
- No-Go Zones are, I guess, slums / gang-controlled areas?
- Municipal Policed Zones are more-or-less normal areas controlled by city police?
- Filter Zones... no idea.
- Sacrified Zones - what's the difference between these and No-Go Zones?
- what is the purpose of those big geodesiac domes - they seem to be different from arcologies, as the Zi Arcology is marked separately..."

So, here's where I try and address the questions above, and hopefully GMs may find this info useful for their own games.

From A Guide to the Central Districts of The Hub

Cape Point Aerospace International - The airport terminals and spaceport, with its 9km long runway designed in 2017 to take shuttles, spaceplanes, suborbital flights and supersonic transports. [off map, to the east]

The Municipal Policed Zones - Corporate or privately owned districts. complete with wealthy suburbs, housing complexes and gated communities collectively known as the Municipal Policed Zones, MPZs or PeeZees. Usually patrolled by the Public Security Agency, or one of the many private law enforcement contractors (PLECs; also referred to as the plex).

"Which plex controls District Six this week?" or "Oh my god! He's been shot! Call the fucking plex!"

The Filter Zones - Beyond the MPZs are the non-privatised and less maintained suburbs; tracts of residential territory subject to state laws and regulations. The PSA are the only protection agency in these zones, unless there is a business or property in the area worth contracting one of the PLECs for, which is rare. The Filters and satellite towns are dotted with scattered corporate sweatshops, assembly lines and component workshops upon which the residents' meagre livelihoods depend. The manufacture of counterfeit goods is very common in the Filters.

The NoGo Zones - Urban areas in disrepair and bordering on lawless zones in some places. Not quite at the level of a traditional combat zone, but getting there. The PSA rarely patrol here and the tsotsi gangs are the de facto rulers of these zones. Criminality of all kinds is rife in the NoGos.

The Zi Arcology - Due to be completed in early 2027, this huge, mirrored edifice, owned by the Zi Corporation, has been designed to be their showcase for controlled urban living, as well as being the regional headquarters for the Chinese transnational. Sister-projects are also nearing completion in Beijing, Hong Kong and the Manchester Protectorate. The vast structure is known locally as 'The Zarc'. Zi Corporation own the global 'Lucky Dragon' brand convenience stores, of which there are many throughout The Hub.

The N-Ways - The Hub's main highways are the N1, N2 and the N7. Each is an 8-lane elevated expressway. The N2 cuts east across the Cape Flats towards Cape Point Aerospace International. The N1 leads north-east through the new townships, and the N7 goes north towards the veldt and the corporate farmlands.

The Fuller-Domes - Self-supporting geodesics built to protect the urban masses from the ravages of Cape Point's freak weather patterns. The areas within are perpetually floodlit by arc-lights and neon. Mostly… Many of the geodesics were not completed before the money ran out, or were thrown up by the cheapest contractors available. Some of the domes have been blackened by years of cooking fires and traffic grime.

The Devil's Peak Microcology Projects - Originally conceived to house the urban poor in a series of inter-linked, manageable environments that would allow the clearing and redevelopment of the townships and the Cape Flats. Another underfunded project that attracted little investment from the transnats, the Projects have been left to decay, creating another bottle-neck of angry, poverty stricken people. The Projects are a hive of criminal and dissident activity. Reclaimed and refitted hydroponics blisters, used for growing weed and other consumables, dot the complex like boils. Improvised solar panel arrays and satellite dishes are also prevalent. The most notorious microcologies are Mandela House, the Sundowner Tower and Uptown.

The Raft - A random assortment of boats, ships, barges, cargo containers, aircraft hulls, drums and pipes resin-welded together into the world's largest ocean-borne shanty. The centre's highest point is fashioned out of a storm wrecked oil rig hull. The population are mainly zeroed and dispossessed Africans, Chinese, Malays and Indians. The central boat towns are good places to hide. The shanty is constantly raided by Public Security and other hired PLECs. The Raft is believed to harbour a number of pirate broadcasters, insane netrunners, murderous bio-chauvenist 'borgs and other social detritus.

There are a number of fast boats, and a few small submersibles used for smuggling. Everybody who lives in Raft City knows how to swim, though the water is foul enough that few would want to. All the local smugglers have contact with the Raft, usually as customers. Fixers know who has a cargo to sell, and who (on land) needs it. The Coastals have tried to sweep The Raft a few times, which usually backfires due to a combination of armed resistance and legal representation. The tsotsi have made a few attempts to muscle in on it, which has only resulted in a lot of unidentified floaters coming in on the next tide. Few of the invaders know how to swim, as it's an uncommon skill.

One of the unusual things about The Raft is the high percentage of older people living there. Old sailors, veterans, transients and the like make up a large percentage of the population, running the floating city like a free port from a previous century. The only income the community has is based on gambling, prostitution, smuggling, and bribes from ships that want to be left alone - not a lot of money, but enough to keep the place functioning. Governance is limited to a council of informally elected elders who act as arbiters in any argument that can't be solved with a fistfight. They exile anybody who causes too much trouble, and act as a liaison to the outside world, similar in many ways to nomad families.

The Raft is divided into several smaller districts, usually divided by language. An observer can often tell districts apart by the styles of boats - the Chinese boats aren't like the Filipino boats, the Vietnamese look different from the Americans and so on. There's not a lot of friction between the groups, as they're used to standing back to back against outsiders.

There are persistent rumors of human trafficking rings working with The Raft, smuggling illegal immigrants with money from several West African nations. People who ask too many questions tend to wind up washed up on the coast.

Link Town - A community to the east of the Waterfront district where the people squat in converted shipping containers. A squatter's city for years, a wide variety of people have lived here, ranging from the gibberish-spouting lunatics, arguing with the voices in their heads, to freelance teams that need a place to lie low and recover from wounds, while corporations scour the local hotels and hospitals looking for them. Every single resident has had some effect on the place, even if it's only graffiti scrawled in a container. A few of the containers will have startlingly modern security - vidcams, pressure sensors, motion-detecting lights and alarms. The majority of them have security no more sophisticated than padlocks and paranoid owners. A few are completely open - micro-churches, unclaimed units (rarely clean, sometimes polluted to the point of being hazardous) or places where the previous owners decided to heat with carbon monoxide, and are still decomposing in their former homes. Some have jury-rigged stoves, and a few have been set up like apartments - complete with electricity, phone service, and the like. A few of the units have doorways cut into their walls, allowing several containers to be joined into a single larger unit, often housing dozens of people in an extended family.

Atlantia Arcology - 8km north of Cape Point's coast lies the early experimental arcology of Atlantia. The majority of the enclosed environment is beneath sea-level, anchored to the sea bed with huge struts, like an oil rig. A 20m sea wall protects the western side of the arcology from the full force of the Atlantic ocean. A domed crown is visible above the waves which is ringed with heli-pads, mooring stations, reinforced windows and observation decks. Weather-faded sponsorship logos of notable investors such as OTEC, Siemens, IEC and EBM adorn the arc of the battered dome, serving as a semi-permanent reminder of their failure to see the project through to completion. Huge areas of the interior were never finished and are largely uninhabitable, although people find a way to exist there. The upper levels have been patched by the occupants with what little they can salvage or trade for and is, compared to the lower sections, quite comfortable. The Government have been trying to shut the place down for a number of years; accountants believe that the arcology is worth more in scrap. The Government suspect the facility harbours a number of high-profile rebels and dissidents; The Burning Light Islamic group is known to have connections on Atlantia. Pirate families are common too.

Sub-Attica & Pollsmoor Maximum Security Correctional Facilities - The two Maximum Security Prisons for The Hub and the surrounding regions. Pollsmoor has an infamous reputation that stretches back to the days of Apartheid. The facility has the latest in prisoner storage facilities in contrast to the crumbling, decommissioned cell blocks that were built in the 1960s. Many political prisoners are held in the notorious Pollsmoor. It is also the prison where gangs like The 28s first formed. Little is known about the Sub-Attica correctional facility other than the fact that it is situated deep within the bowels of the Atlantia arcology, 8km out to sea near Robben Island.

Limpet Town - Hanging off the side of the vast twenty metre high sea wall of the failing Atlantia arcology zone, the jury-rigged and improvised Limpet Town is a dangerous place to live but a great place to disappear. Their buildings are created from scrap washed up against the sea wall, as well as assorted pre-fabricated bubble domes and containers. There are many known pirate families in this ramshackle settlement.

The Warrens - The Warrens are a series of illegal living spaces, built into disused subway tunnels. When the economy crashed during the wars, many subways were privatised, often being bought by corporations. The corps had no real interest in public transport and the subway lines fell into disuse. Orphaned by corporate-owned networks that wouldn't allow anyone to operate a profitable (or even self-sustaining) business, the tunnels became home to hundreds of homeless people. The most well known area is Paradise Loop, a veritable red-light district of improvised pop-up brothels, franchise prostitutes and drug addicts. 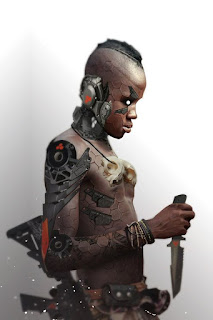 The Suicide District - The very worst of the 'combat zone' areas in The Hub is known as the Suicide District, and it's rusting chain-link and concrete bunkered border is well sign posted. You wave all rights by entering the area. No patrols of any sort operate here, except on the perimeter, and only to keep the population contained. Rumours of cannibalism, sacrifice and strange tribal cults are rife. It's 'legal' to dump any old crap here, including toxics, providing you've got the balls to enter the area.

'WARNING: SACRIFICED ZONE - The National Parks Commission has classified this area as a Sacrificed Zone. The cost of clean-up and redevelopment is prohibitive and exceeds any projected profit for the area.'
Posted by Geist at 11:30