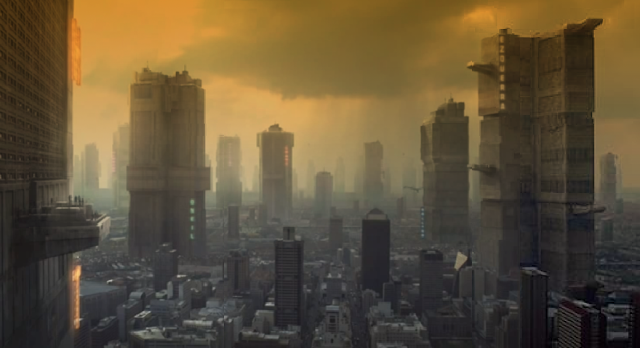 09. SACR Government House (E4)
Government House is the seat of the Republic's parliament and the heart of non-corporate power in The Hub. It is a network of adjacent buildings housing civil servants, MPs, security staff, PR teams, media-spinners, journalists, conference rooms, 'war rooms', medical facilities, AI consultancy suites, the Prime Minister's offices and residency etc. The area is sumptuously styled with the latest artificial landscaping and designed for maximum security. Impact barriers can be triggered to seal the area in a matter of seconds. A CRDF rapid-reaction Fire Force team with AV support are stationed here at all times.

The ID is the SACR's intelligence agency, with interests both national and foreign. The HQ building is a tall, but unassuming, Georgian-styled structure that belies the fact that the entire edifice is state-of-the-art. Many civil servants work here. Beneath the building lie miles of secret corridors, cells, labs, server rooms, interview rooms and much more. The external structure boasts it's own nano-immune systems and transmission screens. The whole smart-complex is monitored by an AI that calls itself Warden.

This large, dark monolith is home to The Internal Security Service, the city’s equivalent to Special Branch or the FBI, charged with combating terrorist organisations and reducing the power of the criminal gangs. It is corrupt at virtually every level, and does not actively pursue the major criminal cartel. Even when it hasn’t been bribed into inaction, it is usually hamstrung by politics and infighting. The ISS controls the city’s main counter terrorist unit, OSEC (Operations/Security), and has superior net operatives to the PSA. It theoretically weeds out corruption in government and the PSA, but in reality it ignores it until it becomes a problem. The ISS spends a lot of time stamping down on pirate media, mainly because they themselves are a major target. The ISS is more willing to stamp down on the urban poor and general citizenry than on those that covertly fund it's activities.

The hacker collectives are beginning to suspect that the ISS possesses an illegal undeclared AI of considerable power (Daedalus). Given the ISS’ reputation for flaunting SACR law, the idea that it could withhold the existence of an AI is not hard to imagine.

The local headquarters of Biocontrol, the descendent of the old World Health Organisation. The structure is a large, stark white, cylindrical tower with the UN blue flag logo and the organisation's name in grey running vertically down the building. Biocontrol work closely with the SACR Government to tackle epidemics, research, perform contingency planning, health education, suppression operations, disease control and offer cutting edge laboratory facilities. There is a lot of work to do in the region following the horror of the Third World Emergency. 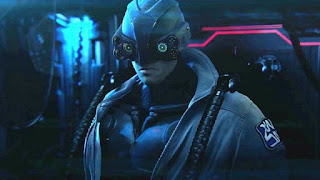 The regional headquarters of the globe's largest legislative organisation. The site consists of three matt black connected towers with UN blue flags flying near the entrance, the organisation's name displayed in silver Times Roman on a black marble menhir, with the UN globe and laurel, also etched in silver. The grand entrance hall and reception of the structure is clad in black marble. Protocol monitor transnat activity, as well as each of the regional governments. They are particularly keen on monitoring the IOS, as they have no official facilities within that particular polity. Protocol sometimes use the Pan African Defence Force as peace keepers across the south and west of Africa, which causes a great deal of tension in the region when they are deployed.

SAFS Embassy - The South African Free State maintains an embassy in the SACR at great expense. This failing state is struggling to stay afloat and it is only a matter of time before the transnats take over, the IOS or PAU invade or Protocol declare the State invalid and divide the territories up. The staff here are fully aware of the state of their nation, and are only concerned about maintaining their position and not being sent home. The SAFS flaunts it's covert operations within the SACR like a nation with nothing left to lose. Perhaps they are attempting to goad the SACR into a full scale invasion of the State…

PAU Embassy - The SACR and other SA states are riddled with agents of the Pan African Union, a pseudo-super-state, headed by the recently industrialised Tanzania and their allies. The PAU are an expansionist, elitist club, backed by a shadowy group of corporate moneymen who are only interested in developing and growing the marketplace for their companies' products.

The PAU have been a problem for the SACR since the secession of hostilities at the end of the Third World Emergency in 2025. The embassy for the Pan African Union is monitored continually by both the ISS and the Directorate. The ISS are suspected of taking financial incentives from the PAU Diplomatic Corps to turn a blind eye to their political activities, and the influence they exert in The Hub. The Directorate finds the very presence of the PAU within the capital to be distasteful. The wider area around this building, and The Hub in general, is steeped in old Cold War style spy activity.

Chinese High Commission - A nest of spies, corporate developers and moneymen. The Chinese are commonplace throughout the continent, snapping up resources and tapping burgeoning markets. Weapons deals are still the most lucrative form of trade for the Chinese. The mighty Zi Corporation seems to be gaining greater control of the Commission staff as time goes on. There has been a huge amount of Chinese influence (and money) in the SACR in recent years, something the Europeans and other Pacific investors are keen to change.

IOS Embassy - A small, converted ministry building houses the embassy of the Incorporated Orange States, the Afrikaans-Transnational fusion that has the Western Cape so on edge. The States are governed like a series of subsidiaries, with the IOS Central Government as the parent company. Corporate entities flock to the region tempted by weighted incentives, lax legislation and a free market place. The IOS regularly antagonises the PAU member states, especially infosocialist Angola. This creates tensions for the SACR, who are trying to pacify the border regions and suppress the smuggling rings operating there.


US Embassy - A half-empty shadow of it's former status. The building is in disrepair and what little of it that is still in use is covered in advertising of all kinds, including AR. The US Embassy exists simply to make money. The minimal staff are little more than wily fixers these days. Rumours abound that a brothel operates in the former hospitality annex on-site. It is also a safe haven for US nationals operating as mercenaries across the south of the continent.

The first thing commuters see are the bright orange lights of this large Victorian Gothic station. The ticket booths are entirely automated but don't take cash. The entrance routes are lined with convenience stores like Lucky Dragon, along with dataterms and pay phones. A series of full-body turnstiles control access into the station.

The trains, while not exactly sterile, are fairly clean, depending on the time of day. They hiss quietly along the elevated tracks, rocking slightly. If you can ignore all the animated advertisement boards, the large windows offer an impressive view of suburban blightscapes, colossal freeway interchanges, and, as it rockets further westward, larger and healthier looking buildings that seem to beckon your attention toward the colossal skyscraper clusters. The cars get more crowded as you head into town. As you approach the Terminus, you pass through long stretches of rail yards and old loading bays. Some of these facilities are alive and studded with lights, and some are just darkened, brooding hulks. From here there are routes to Cape Point Aerospace International, access to the subway network and lines to some of the more affluent districts.

The sprawling complex and imposing fortified towers of the Cape Republic Defence Force. This is the Pentagon of the SACR. It is suspected amongst the upper echelons of The Directorate that a military coup may be on the cards in the very near future. The Ministry is a hotbed of back room deals, whispers and lies. The Angola border disputes are used to distract the media viewing public and as a display of the CRDF's ruthless capability.

This imposing flat-topped pyramid is the regional HQ for the local netwatch, clashing regularly with the PSA's Transmission Felonies department. Sense/Net operatives and agents are ruthlessly efficient and rightly feared.

A very secure compound containing thousands of stacked storage modules and a variety of warehouses. Remote lifters and loaders drone through garish plastic alleyways under the 24 hour arc-lights. Modules and warehouses can be hired. Regular biometrics scans ensure that no-one takes up residence in the compound. Patrolled by PLECs with PSA back-up.

The Cape Peninsula University of Technology formed in January 2005 from the merger of the Cape Technikon and Peninsula Technikon. This sprawling gated and secure campus is the heart of all non-corporate high education in The Hub.