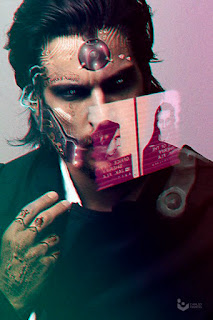 Sometimes you don't want your PCs approached by yet another fixer in yet another dive bar.

Sometimes you want to add a little mystery, along with a soupçon of paranoia, to that first approach by the people with the money and the need.

The following weird contact methods make your PCs ask important questions, such as:

> Why are potential clients reaching out in such obscure ways?

> Why is Ms Johnson going to such lengths to cover up her contact with us?

> What's with all this cloak and dagger shit?
[fast loads H&K shredder and downloads updates for aware targeting system…]

01-02  Hacker drops a .txt file on a PC’s device entitled ‘READ_M3’ containing a v-mail address and a cell phone number; the file is tagged with a clever read-receipt script

03-04  PC receives a call from a low grade AI automated dialling system, that only gives a phone number and a time at which to call it - repeatedly

05-06  Vidfile arrives on PC’s device via courier software, an indistinct, grainy request to log on to the dubious Ebony Ziggurat VRotica netsite, at a specific time

09-10  Sonny De Silva, an infamous fixer, approaches the group via hacked AR projection to ask for their contact details regarding an employment opportunity they may be interested in

13-14  Leather-clad biker screeches to a halt and offers a cell phone to the PCs without getting off her parabolic curve of a bike, saying “Its for you”, and she’ll definitely want the phone back

15-16  Obviously augmented German Shepherd trots over, calmly states the PC should contact
a particular v-mail address, which he will spell out s-l-o-w-l-y, before casually walking away

17-18  PCs find a brand new, wafer-thin, very expensive laptop set up where they are living, ready for a single video call (it contains no other data)

19-20  Client calls PC directly to ascertain availability, background noise suggesting they are somewhere public, will ask PC to call them back in an hour or so to talk business

21-22  Young, bubblegum chewing Somali girl, in an oversized, fur-hooded coat, hands over a scrap of paper with GPS coordinates on it, which lead to a specific parking lot bay

23-24  Insidious subliminal advertising compells one or more PCs to be at a Sumo Food synthiburger joint, next to a busy monorail hub, at 3am tonight

25-26  Handed an exquisite hand-made paper envelope, containing a slip of paper which carries a beautifully written instruction to be on a specific roof at midnight

29-30  Television picture breaks down into a pixelated mess, a long net link briefly forming from the fragmented chaos, just long enough to note it down or take a photograph of it

31-32  Filthy, shuddering android with blistered synthskin, in a tatty coverall, limps out of a nearby alleyway towards one PC, whispering a phone number over and over…

35-36  PCs are visited by a well groomed, pleasant man called Nathaniel Sheen, who has been sent to get one of them to jack in to his neural link to meet a potential client securely online

37-38  For several nights, a PC has the same lucid dream of a string of specific numbers, which turn out to be a net address for a minimalist, black-mirrored VR environment

41-42  Handed a brushed-aluminium business card, etched only with a contact number, by shabbily dressed, emaciated youth who grunts through cracked lips, “They want to talk to you.”

43-44  PC’s cell phone begins autodialling unknown number, until the PC decides to see who it is that their phone is calling, at which point it will stop

45-46  Gravely injured member of the Reject Parade street gang clutching a blue plastic datachip in his bloodied hand, stumbles up to PC, before expiring messily, the chip containing net coordinates

47-48  Message flashes up on a PC’s device, simply stating a time and date, along with an exclusive restaurant’s address, and a table number

49-50  PC’s equipment displays start showing only binary code, when translated, it appears to be a cell phone number

51-52  Hacker jacks a PC’s phone, replacing all their contacts with only one number, but it auto-corrects and re-ups their contacts once the number has been called

53-54  Row of public pay phones ring as a PC passes, and will keep happening until a PC answers one of them

55-56  Healthy looking human thumb in a glass vial is delivered to a PC, complete with label showing an address for a secure storage module; the module contains nothing but a lone laptop

57-58  PC receives a message via v-mail that simply states a time; a sleek, black aero-limo will arrive for them at the time stated

61-62  Uniformed police officer approaches PC, referring to them by name, and hands over a printed acetate with a phone number on it

63-64  One of the PCs finds a plain grey plastic business card with a v-mail address and phone number on it, under their vehicle’s windshield wiper

65-66  Watching the news, a PC perceives a glitch, the anchor then asks the PC by name to phone a number (shown on screen), there’s another glitch, the broadcast then returning to normal

67-68  PC finds an empty Lunglife™ cigarette packet, with a v-mail address scrawled on it in biro, in their jacket pocket

71-72  A string of v-mails through a Cambodian datahaven, enquiring about the availability and skill set of the PCs’ team, followed by a v-mail contact address routed through Prague

73-74  PC takes delivery of a parcel containing a pen drive that contains a number of URLs and log on details that need accessing in order, to arrive at the client’s offshore net domain

75-76  PC is v-mailed the map reference to an area of ocean off the nearest coast, along with a date and time that they need to be there, should they want to discuss a job (there's a yacht there)

77-78  The expected pizza delivery contains one extra box (yay!) that holds a mid-range tablet device (what?), set up to enable a vid chat via a secure, darknet distributed server web

79-80  Six heavily armed, but smartly dressed, professionals burst in while the PCs are chillaxing, their leader carrying an attache case that holds a satellite phone he insists they use RIGHT NOW!

83-84  High end Svetlana-9 sex-synthetics are sent to the PCs, along with liquor and drugs but, before the fun starts, the PCs must call a number provided (and the synthetics are wired to record it all…)

85-86  Bloodied body armour vest dumped outside the PCs’ door, a v-mail address sprayed on to it in bright, yellow paint; recognise the armour as belonging to a contact or ally

87-88  PCs are unaware that they have been directed by compromised traffic AI to the Neoshima Atomic Rose motel, where there's a message in reception for PCs to wait in Capsule 17

89-90  Approached by a creepy, twitchy, geisharoid synthetic, remotely operated via the net by the client, to make their initial contact safely and to arrange the meeting proper

91-92  PMed via Union Transmetropolitan hotel's message system, stating there's an item in room 2155 they need to collect (it’s the client and they need protection, just to leave the room)

93-94  A sobbing, hollow-eyed junkie gives one of the PCs a cell phone number and, trembling, suddenly shoots himself under the chin with a cheap, red polymer automatic

95-96  Frightened and emotional middle-aged cleaner, Ginetta Coleman, has been surgically fitted with a cortical bomb, which will explode if the PCs don’t call the number she provides

97-98  The client has Grade-A dirt on an already trusted contact of the PCs, and uses them to pass on the clients v-mail address; the contact seems deeply uncomfortable with this and is insistent

99-100  Harmony Jade, a 10 year old girl in a red vinyl coat, chainsmoking Chinese cigarettes, delivers a portable hard drive, with downloaded maps to a cell phone in an abandoned warehouse
Posted by Geist at 16:50